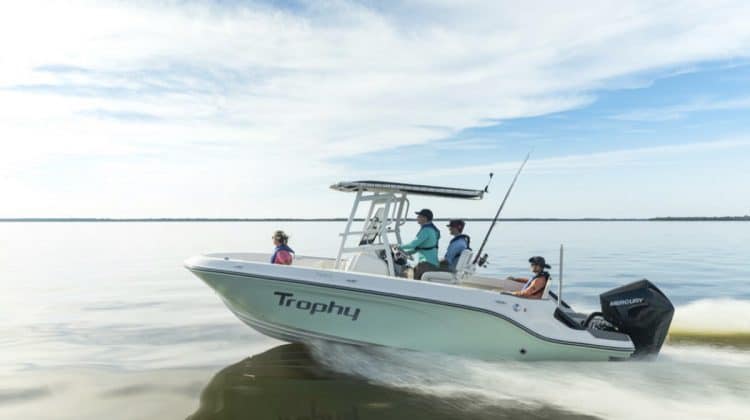 Bayliner boats have been on the shores for a long period now. The company has been in business since 1957. That makes it older than many of the people who are reading this article.

So why am I writing this piece?

To analyze a boat line that Bayliner started in the early 1980s named the ‘Trophy.’

The Bayliner ‘Trophy’ boats series was exclusively built for fishing and garnered huge sales volume during the years from 1987 to 2009 when the company finally discontinued its manufacturing.

This series was owned by Bayliner and then Brunswick Corporation as they acquired Bayliner. The trophy series operated under both brand names, though.

In this article, I am about to answer: are Bayliner Trophy boats good?. Nothing is going to be shoved down a boater’s throat. It will be a simple probe of the benefits vs. shortcomings of this boat series. So, here we go:

Boats are an expensive choice to make. They need huge upfront investment and maintenance costs that can be very heavy on the owner’s pocket. However, Bayliner has been a huge success in terms of sales volume.

I am sure there must be some advantages that made it so successful for the company, and people bought the Trophy boats worldwide. Keeping that in mind, here are some benefits of this boat that the owners vouch for:

Bayliner produced basic boats that were the best bet for their price range. The company continued the price competitiveness in this series as well.

With the Trophy series, many people could own boats for whom owning a boat was near to impossible with sky-rocketing prices.

For the Trophy series, the raw materials used were fiberglass and wood in the starting models, which tremendously cut the cost of manufacturing, hence the affordable prices.

The company aimed to make boating affordable for the middle class, and they succeeded in achieving their goal.

With their appealing pastel colors, the boats of the Trophy series come with a deep V-hull. The design is great in terms of aesthetics.

The boat appears to be compact and easy to manage. With their self-bailing cockpit, it is easier to manage the water that gets inside the boat (it usually doesn’t, due to the V-hull that cuts water effectively)

The hydraulic steering is another part that adds style to the overall design of the boat.

It is a safe boat in terms of water getting inside or stability in the water. The cockpit is specially designed to resist rainwater.

Other than the cockpit, the additional features, such as the mooring cleats that provide the best support for anchoring the boat, made it a great choice for boaters.

The anchor locker, along with the mooring cleats, makes it easier to moor the boat with efficiency even in tough weather conditions.

The Trophy series is designed for recreational fishing. Therefore, it provides storage options for that.

The central console design is especially suitable for fishing with friends and family, as the deck is spacious, and the storage capacity is better than other competitor boats.

There are usually two live wells in the boat for effective storage of the fishing yield. Both of them use fresh aerated water from the surrounding body of water through pumps.

There are reasons even the most successful models start declining after some time. The Trophy series also must have some drawbacks that led to the discontinuation of the boats’ production. Let’s see what problems did the owners of these boats faced:

The hardware doesn’t pass the strength test in most cases. The fittings wear out quickly.

The fiberglass floor is one thing that had the most complaints about. It started wearing out quickly, and holes can be spotted out. This wear and tear make the maintenance cost go up by several notches, which becomes hard to keep up for the owner eventually.

As mentioned earlier, these boats have basic designs. The engines do not allow upgrades. The same is the case with their other components.

Unlike the modern boats that give many options of upgrades, these boats do not offer much other than some internal parts upgrades, such as the cushion covers (not sort of upgrades, yeah).

The resale value for Trophy series boats is low. They do not give additional bucks, or as a matter of fact, they do not recover the maintenance costs when you go to the market to sell them.

One reason behind this low resale value is that the boaters are getting smarter. They look for options that do not require too much maintenance.

They look for newer boats in their budgets where this series failed due to the discontinuation of its production.

Suitable Only For Near Offshore

Although designed exclusively for fishing, these boats do not perform well in deep waters. The owners of most of the Trophy series boats use it only for short recreational voyages because the boat doesn’t support the deep sea turbulence.

The gunwale is not very high, which makes it difficult to stabilize in the deep sea. This is why most of the owners use these boats in lakes.

Looking at all the points from the benefits part, and the shortcomings, the Bayliner Trophy series seems to be an outdated option to own.

The technological shifts in boat manufacturing have left this series as a less desirable option for boaters looking for modern boats. However, we also can’t deny its raving success in the earlier years of its production.

There are rumors that the company might launch it again or develop a similar successor model. Bayliner has been one of the flagship producers in the boating industry, so their boats earn a solid reputation even if they are now discontinued.

So the Bayliner Trophy may be a good option for a newbie with a limited budget who doesn’t necessarily need something fancy.