You are here: Home / Boating / Guides / Are Whales Dangerous To Boats? 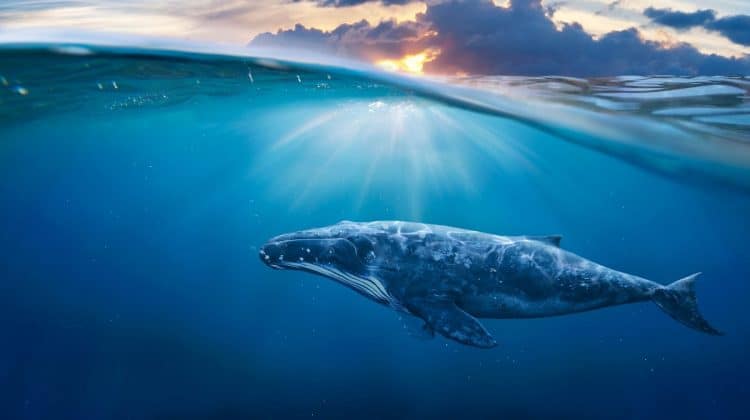 Remember ‘Free Willy’? That movie makes you create a soft corner for whales in your heart. But whales aren’t as cute as the movie portrays them.

I don’t mean they are like sharks, the bloodthirsty monster you saw in ‘Jaws.’ But if you have read Moby Dick, you would know what I am talking about.

Does that mean you should be on the lookout on a boating trip? Are whales dangerous to boats? Or is it just a myth?

You will find the answers to all your questions in this article. Keep reading!

They have inflexible necks, flippers instead of limbs, and a large tail fin.

There are two main types of whales, the baleen and toothed. The toothed variety feeds on large fish and squids, whereas the baleen group uses fibrous plates (baleens) in their mouths to filter out crustaceans, plankton, and krill.

Beluga, sperm, humpback, gray, blue, right, and killer whales are some of the main species. Out of these, blue whales are the largest (90 feet) and can weigh as much as 24 elephants.

Killer whales (the one in ‘Free Willy’) aka Orca are highly social whales that travel in groups and exist as a family of mother and kids.

Oceans and seas worldwide have whales in them, but whales prefer the Northern and Southern hemispheres, where the water is cold.

They travel towards the equators to give birth. But some species can be found in tropical seas all year round.

Role In Ecosystem and Climate

Being the largest sea mammals, whales need to eat a lot of food every day to survive. An average blue whale eats up to four tonnes of krill every day.

Therefore, whales play a role in maintaining the balance of the sea’s ecosystem, which would otherwise get too crowded.

Whales have their predators, too, such as some deep-sea creatures and killer whales (killer whales themselves have no predators).

Moreover, when a whale dies, its carcass sinks to the bottom (whale fall) and serves as a food source for plenty of deep-sea organisms.

Another advantage of whales is that their defection is in liquid form, which stays on the ocean’s surface. It is rich in nutrients, so phytoplankton feed on it.

Phytoplankton, in turn, helps by absorbing carbon dioxide from the atmosphere and releasing oxygen into it. Thus, making about 50 to 85 % of the oxygen we breathe and decreasing global warming.

Whale Attacks: Incidences From Around The World

Whales don’t prey on humans, but several reported whale attacks have done severe harm to them. Following are a few examples.

In 2020, several killer whales have been harassing sailboats along the Spanish and Portuguese coasts.

The number of attacks is alarming, which has raised concern, and even scientists are puzzled by this type of aggression shown by the killer whales. Some of the incidents are as follows:

It’s not clear why whales attack boats, but according to some researchers, the recent attacks are probably a revenge act on humans, as killer whales feed on tuna. And they know fishing ships come up and steal all their food.

Other marine researchers think the whales liked the quiet sea during the Covid-19 lockdown and don’t like the noise pollution that has returned.

What Precautions Can You Take To Avoid A Whale Attack?

You can take the following measures to stay safe:

Humans are a threat to whales’ survival in so many ways, primarily through industrial pollution and fishing. Then, in my opinion, their act of retaliation by attacking our boats is justifiable. What do you think?