You might have been looking into discovering RVing, picturing yourself and your love ones exploring the ins and outs of the country, whilst still able to keep up with things such as work and having a social media presence.

If this sounds like you then you will most likely need power while you are on the road and that power will have to more times than not come from your RV’s battery.

Given that it is a battery, it has a finite power source which has to be recharged but that poses a question: is there a way to charge the battery?

How Do Chassis Batteries Get Recharged?

An RV’s battery is typically charged via a built in converter which transforms AC power into DC power. It is also possible to charge the battery directly by using your towing vehicle’s alternator, wind power and solar power.

RVs regardless of if they are towable or motorised will require power which is used to power the appliances and electrical gadgets in the camper. Another way that the chassis battery can be charged is via shore power.

So to answer the question, it is possible to use shore power to charge your RV’s battery. Depending on the RV, you can even get power from the two sources.

What exactly is shore power? 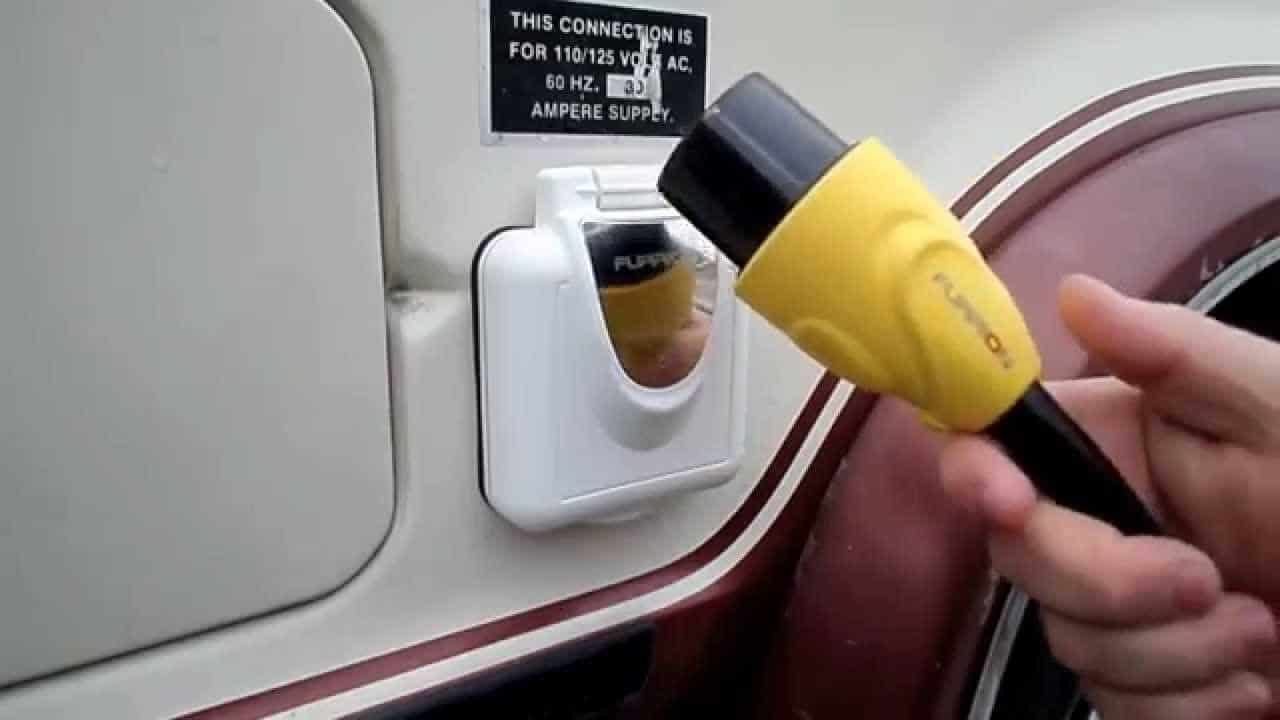 Shore power can be defined as the power connection via an electrical grid, usually from an RV campground to an RV’s power cable. This connection typically offers up 120V via the hook-up to power different appliances and electronics housed in the RV.

The majority of RV’s tend to come with shore power cables. When it comes to connections, there are three varying connection types, and every one of them has a different amperage. That being said, note every campground comes with all three connection types.

An amp is a term given to how electrical flow is measured. When you have more amps, it means that you have a higher amount of current going via the cable to the device.

When the amperage is large, then it means the current flow would be higher. This translates to more power being consumed and a larger power cable being required.

How to charge your battery using shore power

It is recommended that you utilise a portable EMS system to help protect your RV’s electrical system form overload.

What you do is to insert it in between your RV and the power source to ensure that any spikes in power don’t get into your RV’s electrical system to damage its electrical circuits.

You really don’t have to know how it works, just that it does. It should be plugged in at all times, regardless of if you are just charging the RV’s batteries or running your appliances on shore power. More on its function later.

There are quite a few ways that your RV’s battery can be charged utilising an inverter. It is possible to hook your RV up to the electrical grid using the 50 or 30 amp outlet hook up at a state park, national park or campground. It is possible to also hook up your RV to your home using the 20 or 15 amp outlet. 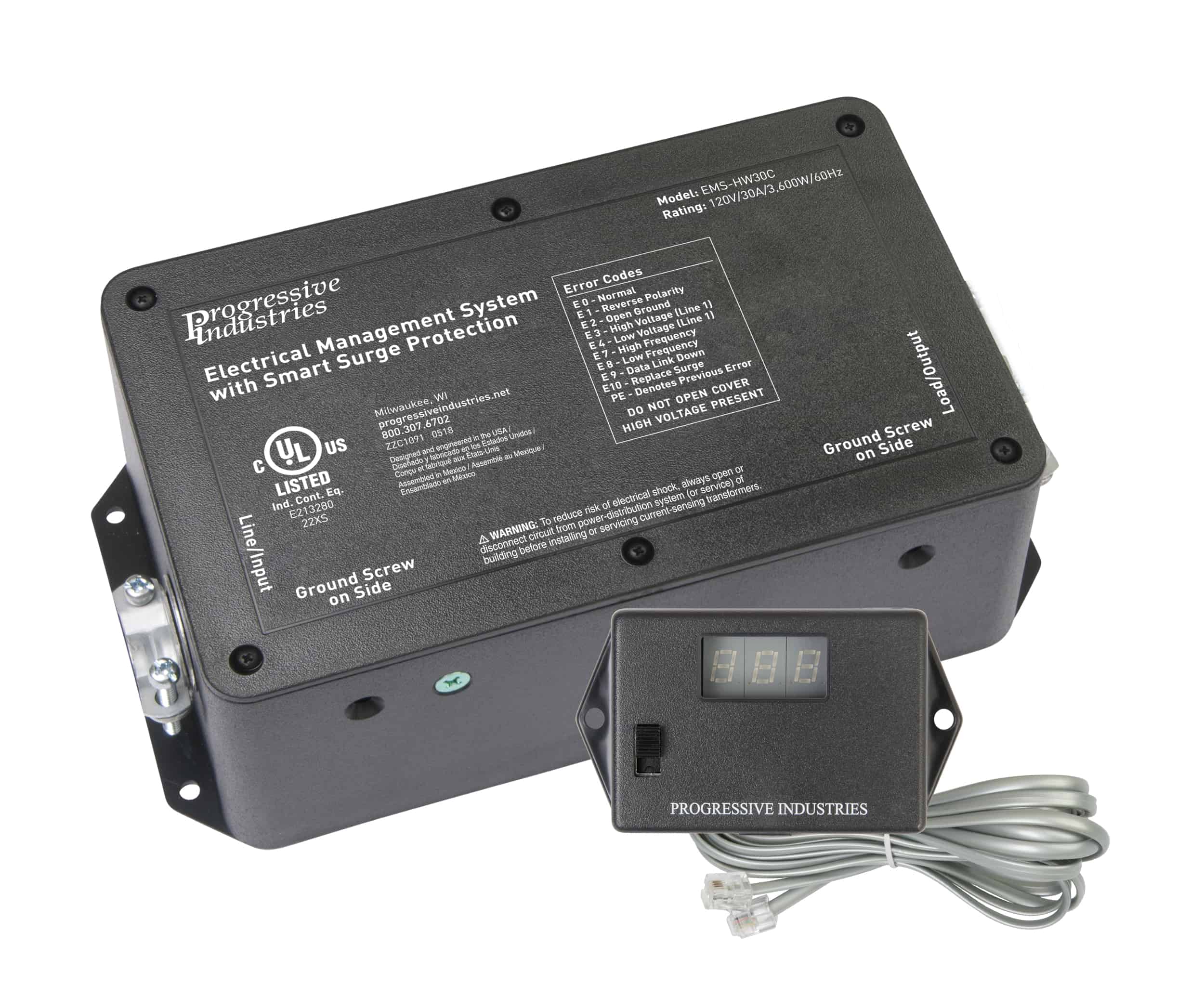 A major difference between the 30 and 50 amp power system is the fact that the power has been increased more than three fold. There are certain RVs that have a built in EMS or Electrical Management System.

Its aim is to automatically turn off the power when demand outpaces availability. This ensures that it forms a barrier between your RV’s power system and the shore power or whatever external power source you are using.

An RV typically has a 50 or 30 amp outlet which enables you to power it using an electrical grid, which is also known as shore power. The majority of small RVs tend to have a 30 amp outlets whilst bigger RVs come with a 50 amp outlet.

When the RV is connected to shore power, it automatically starts to charge its battery, whilst running the electrical appliances concurrently.

This is done by sending power via the inverter which then splits it into two channels sending Direct Current to the 12V batteries and AC to the 120VAC circuit breaker.

It is from the breaker panel that all of the ac outlets used in the RV are connected and any DC appliances in the RV will be connected directly to the battery hookup.

In the event that the battery completely dies, you will still be able to run all the AC appliances from the outlets, however, the DC only ones will be unable to work. For most RVs, the overhead lights are the only items that are powered by DC power.

It is also possible to connect your battery to shore power using an extension cord, just as you would plug a 50 or 30 amp plug.

You could also choose to take the battery out of the RV and charge it directly using a battery charger rated 12V within the home. This second method is actually a popular method used by those that have smaller popup RV batteries.

If your RV is small enough or it happens to be a travel trailer, you could park it inside the garage and charge the 12V battery without having to disconnect it from the camper.

Difference between the different amperages

As stated earlier, you can get shore power cables in two varying amperages 50 and 30 amps. To help RVers tell them apart, they each have a distinct physical identifier. For one, the 30 amp cable comes with three prongs, while the 50 amp comes with four prongs.

This goes in line with a larger amperage meaning more power. There is also a third amperage which provides 120V. This amperage is typically found on smaller towables such as travel trailers.

The 30 amps power system while also providing 120V gives off a higher wattage rated at 3600 watts.

Last but not least, the 50 amp with its four pronged plug offers up 240V, which is simply two 120V wires that give off 50 amps each.

This 120V power system feeds into the RV’s circuit breaker where it is divided to give off 12000 watts.

The majority of campgrounds have electrical capabilities to suit your electrical needs. Nevertheless, you could only get a 30 amp outlet, however, this is dependent on the type of campground you visit.

When heading to an unknown campground, it is always best to call first to ask what kind of hookup is available. You could also decide to get a dog bone adapter. This adapter enables you to connect your RV to just about any receptacle.

One thing to note, however, is when you connect a 50 amp cable to the adapter, it becomes 30 amps as it is stepped down. This means you are only able to utilise 30 amps.