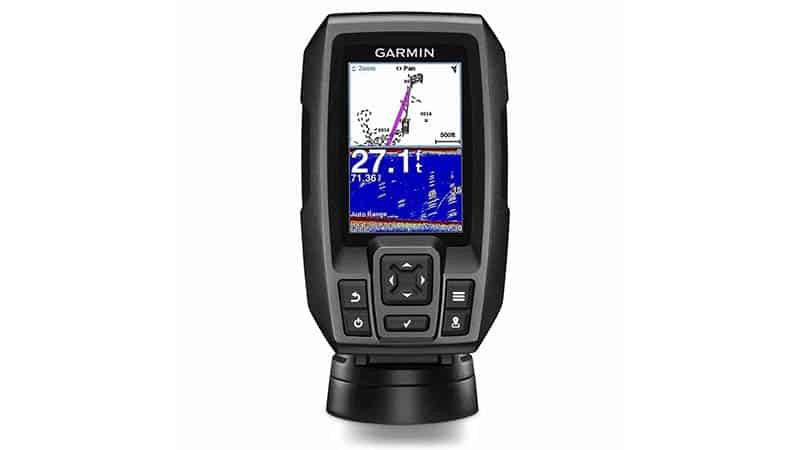 The STRIKER lineup of fish finding technology from the folks at Garmin have always been relatively bare-bones compared to the other more “full-featured” fish finding options – like the ECHO lineup, for example – but anglers all over the world have flocked to the STRIKER series because they flat out performed.

The most affordable of all the STRIKER fishfinder option on the market today, the Garmin STRIKER 4 GPS Fish Finder also happens to be one of the most compact fish finding solutions you’ll find today with built-in CHIRP Sonar calling the shots.

Quality across the board the end with the kind of legendary GPS/Sonar capabilities you’d expect from a brand like Garmin, we think you are going to be pleasantly surprised by everything that the Garmin STRIKER 4 GPS Fish Finder brings to the table.

Here’s what you get

Right out of the gate, you are going to be incredibly impressed by the precision and accuracy of the Garmin STRIKER 4 GPS Fish Finder, but you’re also going to be pleasantly surprised by everything that this fish finding solution comes with as far as accessories are concerned.

The instructional manual not only provides details about how to best use your new fish finder from Garmin, but it also provides links to online videos that can help you squeeze every drop of power and performance out of this incredibly advanced but still inexpensive fish finder.

Of course, you’re also going to be able to enjoy full protection from the legendary and industry-leading warranty from Garmin. You won’t ever have to worry about your system failing you and not receiving repairs or replacements from the manufacturer!

The biggest standout feature of the Garmin STRIKER 4 GPS Fish Finder has to be the inclusion of the Mid and High Range CHIRP Sonar system.

You’ll be able to effortlessly scan depths upwards of 1600 feet in freshwater and 700 feet in saltwater, though you’ll have to take advantage of extension transducer cables (sold separately) to reach those kinds of depths. With the transducer that comes with the Garmin STRIKER 4 GPS Fish Finder, you’ll have capabilities to scan up to 800 feet deep right out of the box.

The CHIRP Sonar that is the heartbeat of this unit produces the most accurate images of any of the ultracompact and affordable fishfinding options out there. This is a unit that isn’t just going to help you find fish underwater, but it’s also going to help you read and identify structures, track movement, and get real-time feedback about the sonar scans on regularly updating basis.

It just doesn’t get a whole lot better than that!

You’ll have the ability to flip the identification of the CHIRP Sonar readings from actual scans of the images to the Fish Simple ID system. This analyzes each individual sonar return and assigns fish icons to any return that is determined to be a fish, helping you to better understand where the fish are at a glance while also clearly differentiating them from structures and debris that might be picked up by the sonar system as well.

The navigational tools provided by the Garmin STRIKER 4 GPS Fish Finder are impressive, though you’ll have to utilize your own mapping system with this STRIKER unit. There aren’t any maps baked right into this fishfinder, though there are numerous ways (outlined online) to add your own maps or to chart your own plots using the waypoint system.

You will be able to add up to 5000 individual waypoints before they start recording over themselves, plenty enough to add waypoints for an entire year of fishing before you start all over again!

It’s important to remember that this unit is in affordable and relatively bare-bones option, even as far as the bare-bones STRIKER lineup is concerned. If you’re looking for something to plot a course on all of your favorite water or completely strange and foreign water, and then basically steer the boat as well you’ll want to look somewhere else.

But if you’re looking for an advanced sonar system that helps you find fish and identify structures under the water without any headache, without any hassle, and without any frustration – all without breaking your bank account into tiny little pieces along the way – it just doesn’t get much better than the Garmin STRIKER 4 GPS Fish Finder.

All things considered, the folks at Garmin have knocked it right out of the park with this fish finding option.

A perfect entry point for those that are just getting started with fish finding technology, as well as casual or more recreational style fishermen and anglers, this is the kind of fish finding solution that will certainly improve the quality of the time you spent out on the water while at the same time never putting an oversized dent in your bank account.

The Garmin STRIKER 4 GPS Fish Finder really is something special!