The folks at Humminbird have been responsible for producing some of the very best fish finding technology on the market for a number of years now, and the Humminbird Helix 5 Chirp GPS G2 Fish Finder is a perfect representation of the top-tier technology that they are able to bring to the table.

About as advanced a fishfinder as you are going to find on the market today, the Humminbird Helix 5 Chirp GPS G2 Fish Finder is relatively inexpensive (especially compared to some of the other less feature-rich but more expensive options) while still taking advantage of incredibly advanced technology throughout. 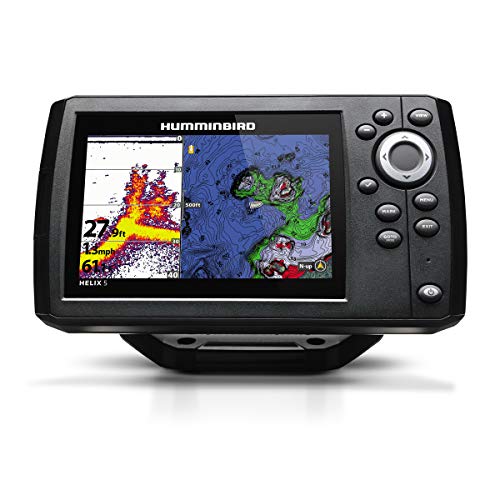 Really easy to use, control, and manipulate, everything about the Humminbird Helix 5 Chirp GPS G2 Fish Finder sets it apart from the rest of the pack.

Featuring a game-changing sonar technology in the CHIRP Sonar system, but also taking advantage of Auto Chart Technology, this just might be the very last fish finder you ever end up purchasing from here on out!

Touching on the technical details

… And that’s just the tip of the iceberg!

Highlighting the sonar technology “under the hood”

The major reason to get your hands on the Humminbird Helix 5 Chirp GPS G2 Fish Finder compared to all of the other fishfinding options available on the market is that of the advanced CHIRP Sonar built right into this unit.

Supporting both the 83 and 200 kHz frequencies, you are going to be able to modulate the pulse that’s generated by your transducer over a range of different frequencies – really helping you to dial in the accuracy of the Humminbird Helix 5 Chirp GPS G2 Fish Finder while you are using it.

This is going to allow you to produce superior target separation, much better imaging with a lot less “noise”, and advanced bottom lock, and much-improved depth capabilities compared to other options available right now.

While the Humminbird Helix 5 Chirp GPS G2 Fish Finder does not include side imaging or down imaging technology, the CHIRP Sonar is more advanced than a traditional 2-D sonar system. Utilizing the Dual Beam Plus technology, you’re able to scan the water under your boat with both sonar beams at the exact same time, painting a much more accurate picture with this system then you would have been able to with traditional 2-D sonar solutions.

You’re also going to be able to effortlessly read the temperature of the water at varying depths, and can reach 1500 feet in readings with the Humminbird Helix 5 Chirp GPS G2 Fish Finder right out of the box. There is also a Deep Water Transducer accessory available, and when you pair it with your Humminbird Helix 5 Chirp GPS G2 Fish Finder you will be able to increase your depth reading capabilities all the way up to 2500 feet deep.

Selective Fish ID, Fish Alarm, Sonar Recording, and Switch Fire technology are all built right into the Humminbird Helix 5 Chirp GPS G2 Fish Finder unit as well. Of the bunch, your Switch Fire is probably going to be the most frequently used and certainly the most appreciated feature of the bunch. It allows you to quickly jump between “Clear” and “Max” modes, eliminating all of the clutter and noise on your fish finding screen and instead providing you information on only the biggest fish targets possible for allowing ALL sonar information to be presented so that you can pick and choose the fish you want to target.

The Circular Flasher technology, Bottom Lock technology, and the Real Time Sonar (RTS) are other top-tier innovations brought to you by the folks at Humminbird.

You’ll be provided with real-time information about the actual depths you are fishing in, giving you details regarding true bottom, as well as real-time feedback from your sonar system as it scans. You’ll be able to track fish movements more effectively and more efficiently when you have both of these systems running in the background for you!

You’ll get incredibly in-depth information about contiguous US coastlines, inland lakes, and rivers, as well as 3-D details that allow you to better understand the topography you are getting into when you’re heading out to go fishing.

Planning, mapping, and charting technology also allow you to set different waypoints to better plan your day out on the water. Because the system is so intuitive and easy to use, you’ll also be able to update your charts with “inside information” about the fish you are after on the fly as well.

You can track up to 2750 waypoints across 47 individual routes with 50 different tracks – and each track is available to hold up to 50,000 track points along the way. This might become the most useful fishing journal you’ve ever had access to, and it’s all thanks to the incredible navigational charts and Auto Chart Live technology baked right in.

At the end of the day, if you’re looking for a fishfinder that is about as easy to use and control as they get these days, with a waterproof rating sitting at IPX 7, and all the bells and whistles of the most high-end fish finding technology on the planet right now at a price tag that you just can’t beat there’s literally no better option available them the Humminbird Helix 5 Chirp GPS G2 Fish Finder.

As far as downsides or drawbacks of the Humminbird Helix 5 Chirp GPS G2 Fish Finder system are concerned, the only real complaint found online today regarding this fish finder is the fact that it doesn’t include a unit cover – and that’s the only complaints!

There simply isn’t anything else or complete in the fish finding space available at Humminbird Helix 5 Chirp GPS G2 Fish Finder.

The folks at Humminbird have cranked this one right out of the park!

Catfishing With Shrimp: a Detailed Guide

How Many Fishing Rods Can I Use in Texas?

My name is Jonathan Holmes. I am passionate about the outdoors and enjoy writing about what I love. I love camping, fishing, sailing and really anything else that gets me out into the fresh air. I began this blog as I wanted to write about what interests me, whether that's RVs or my latest fishing trip, you'll find it all on this blog.
Contact us: jonathan@crowsurvival.com