Home Off Road Bikes Pit Bike vs Dirt Bike: What You Need To Know

Dirt bikes are pretty similar, but there are no fewer differences between them than similarities. In fact, some features make dirt and pit bikes completely different vehicles.

With that said, how do pit bikes compare with dirt bikes? And which one would be better for you?

Let’s try to find that out!

What Is a Pit Bike? 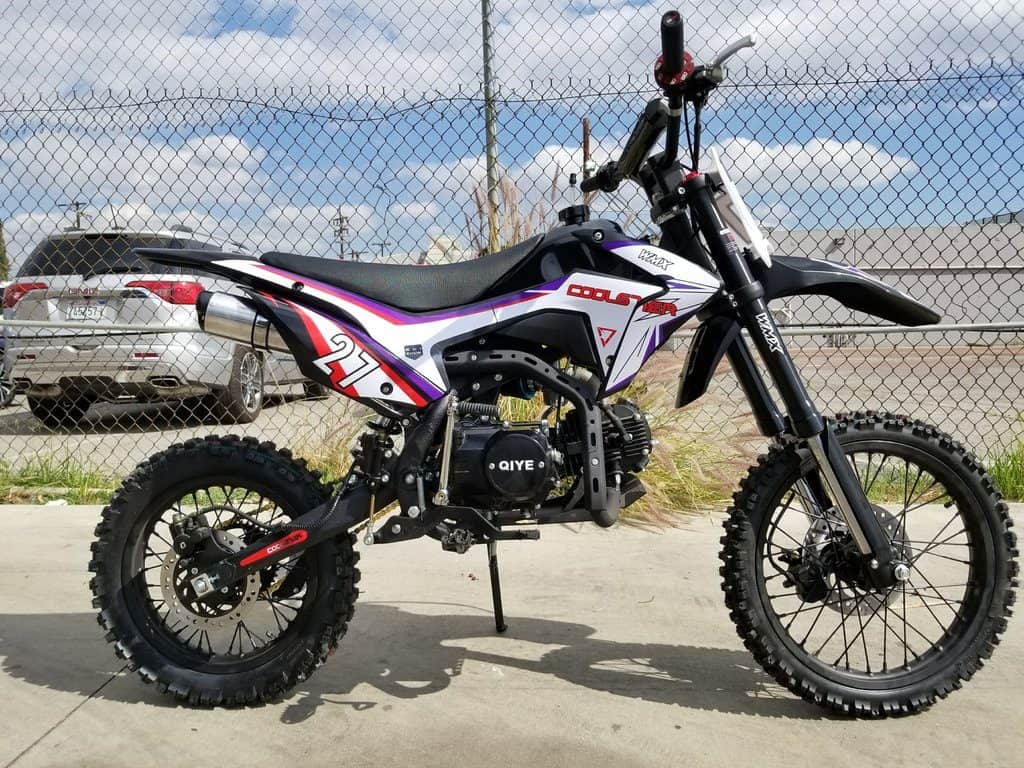 A pit-bike is a relatively small off-road motorcycle designed primarily for bit bike racing, though pit bikes may be used on other race course areas as well. Pit bike racing is fairly similar to motocross, but pit bikes are more compact and lightweight.

Pit bikes are commonly based on the Honda Z50R motorcycle which was introduced in 1979 as Honda’s solution to the increasing demand for mini dirt bikes.

Pit bikes are particularly popular among younger riders since they are easier to operate than regular dirt bikes. With their shorter wheel base and lower center of gravity, pit bikes deliver an easier handling experience for less skilled riders.

What Is a Dirt Bike? 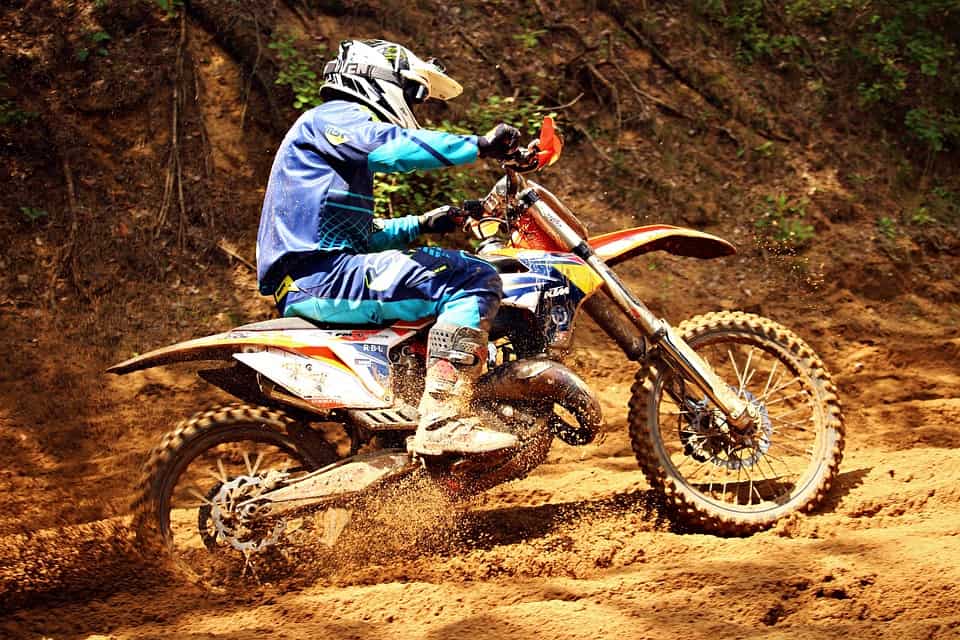 “Dirt” doesn’t refer to a specific bike type. Instead, it just refers to the purpose served by a motorcycle. This means that any motorcycle designed to be operated off-road can be considered a dirt bike. Following this logic, pit bikes are also dirt bikes but smaller and lighter.

Dirt bikes (also called off-road bikes) are designed for riding on rough off-road surfaces such as sand, gravel, mud, or snow. And since the purpose of dirt bikes is very different from regular street motorcycles, there are plenty of design differences between them.

So, here’s how dirt bikes differ from street motorcycles:

It’s also worth talking about the different types of dirt bikes. As mentioned above, “dirt” refers not to a specific bike type but a purpose a bike is designed for.

The types of dirt bikes are as follows:

As mentioned above, pit biking is very similar to motocross, so much that you could say that pit bikes are just smaller motocross bikes.

Since there are plenty of dirt bikes out there, the pit bike vs dirt bike comparison becomes a bit more difficult. While “dirt bike” and “pit bike” both are general terms, “dirt bike” implies many more biking disciplines.

With that said, it is still possible to pinpoint some general differences between dirt and pit bikes.

Aside from that, four-stroke engines deliver a steadier and more predictable power delivery. The powerband is also smoother, which makes pit bikes easier to operate. This is one of the reasons why pit bikes are popular among the youth.

Two-stroke engines complete a power cycle in two strokes rather than four. Intake and exhaust occur simultaneously, and the end of combustion and the beginning of compression happen at the same time.

Two-stroke engines are less fuel-efficient and less environmentally-friendly. In a two-stroke engine, the burnt oil is released into the air with the exhaust.

Not only that, but two-stroke engines tend to live shorter than four-stroke engines since they require frequent shifting and operate at a higher RPM.

And yeah, two-stroke engines have less smooth power delivery which makes them difficult to control for less skilled riders.

On the other hand, two-stroke engines have an edge when it comes to maintenance costs, simplicity, and power. If you didn’t know, a two-stroke 125cc engine is roughly the same as a four-stroke 250cc engine in terms of power. And since dirt bikes can have up to 300cc two-stroke engines, they are much more powerful than pit bikes.

What’s pretty important about pit bikes’ smallness and lightness as well is that they are easier to store and transport.

With that said, since pit bikes have smaller frames, they aren’t as great off the road as dirt bikes. Overcoming obstacles is more difficult for them because of their shortness, so there are fewer off-road areas where you can safely and comfortably ride a pit bike.

Pit bikes: pit bikes tend to have smaller 12-14-inch tires. Usually, the front tires are sized at 14 inches while the rear are at 12 inches. The tires are obviously sized down to become compatible with smaller frame sizes.

Dirt bikes: dirt bikes usually have around 18-inch tires. Not only are dirt bike tires larger, but they also usually have an additional layer of rubber on the outside surface of the tire that makes them better in a wider range of off-road conditions, especially on uneven surfaces.

Pit bikes: pit bikes come with pretty decent suspension that allows them to safely and without damage to cover pit courses. With that said, since pit bikes’ small frames make them worse off the road, their suspension quality is inferior to that of dirt bikes – pit bikes simply don’t need as great suspension systems.

Dirt bikes: dirt bike suspension tends to be better than that of pit bikes since dirt bikes are better suited for off-road biking. With that said, how good the suspension is exactly will significantly differ from dirt bike to dirt bike.

Motocross dirt bikes have great long-travel suspension that allows them to withstand high jumps at high speed. On the other hand, enduro or trail bikes may have worse suspension since they are designed to cover long distances rather than jump around.

But overall, dirt bikes’ suspension is going to be superior to that of pit bikes.

With that said, when four-stroke engines do require maintenance, they can become a nightmare. You have more parts to deal with, not to mention that repairs tend to be more difficult and more expensive. This also applies to cleaning.

But if your dirt bike has a four-stroke engine, then the maintenance and cleaning will be no easier than in pit bikes.

Pit bikes: pit bikes are quite expectedly cheaper than dirt bikes. You can easily find pit bikes under $1,000, though you may need to pay more than that if you are looking for a really rugged pit bike for competition.

Which Bike Type Is Better For You?

Well, given all of the above, we think that it’s pretty easy to make a choice here. Dirt bikes and pit bikes aren’t interchangeable – you can’t use a pit bike as a dirt bike and vice versa. This means that you should go for whatever bike will be able to satisfy your needs.

With that said, if you are looking for an off-road bike for your kid, a pit bike may be a great option for them. A pit bike will allow your kid an easier entry into off-road biking for less money. Do remember though that pit bikes can’t challenge rough terrain.

Jeep Liberty Towing Capacity: How Much Can You Tow?

My name is Jonathan Holmes. I am passionate about the outdoors and enjoy writing about what I love. I love camping, fishing, sailing and really anything else that gets me out into the fresh air. I began this blog as I wanted to write about what interests me, whether that's RVs or my latest fishing trip, you'll find it all on this blog.
Contact us: jonathan@crowsurvival.com
© © 2019 Copyright Crow Survival