You are here: Home / RVs / Guides / RV Slide Goes Out But Not In: Troubleshooting Tips 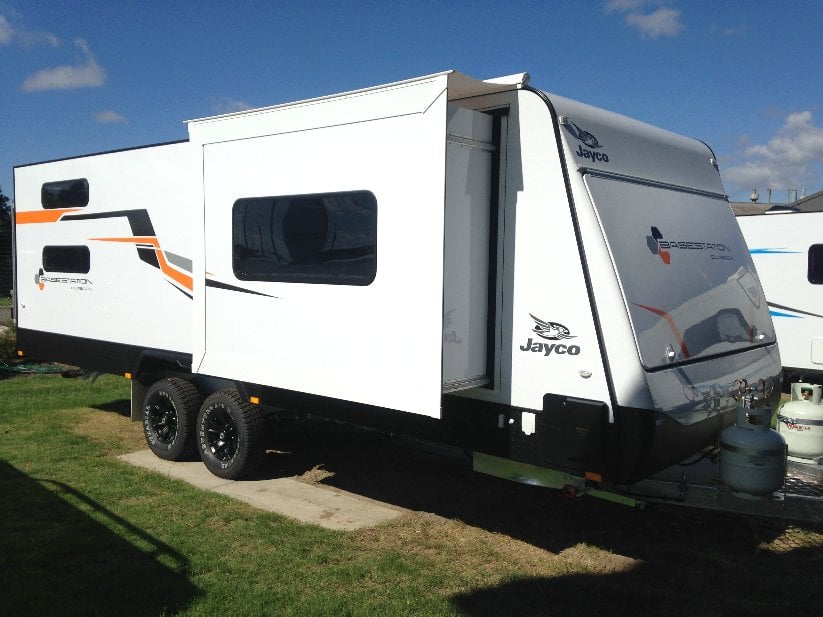 If there is one thing every RVer should have in their RV, it is a rudimentary toolset. It does not matter if your hands know their way around the inner workings of an RV, or they would get lost, eventually, you’ll have to roll your sleeves up to sort something out with your RV.

This article aims to tackle why your RV slide goes out but is not retracting. This is a common issue so you are bound to find a solution that works for you. However, before we troubleshoot the problem, we must first discuss what an RV slide is?

What is a slide out?

RV Slides were first created in the 90s. At the time, RV manufacturers only fitted one slide-out wall, however, when they became immensely popular, RV brands decided to add more walls, adding to their overall length and width.

What a slide really is, is a unique section of the RV that slides out thereby offering you additional living space. This little bit of extra space could mean having more room for everyone or having everyone in the RV be on top of each other all through the camping trip.

It is possible to get two different slide outs types from RV manufacturers. While they both, in essence, do the same thing one is powered using hydraulics while another is electrically powered. The two systems both have their advantages and disadvantages. Having a slide out in your RV means that you need to be even more vigilant.

There are two major issues that you have to be aware of when you use an RV with at least one slide out. The first thing would be to ensure that they are working correctly when the RV is purchased or rented. Secondly, you have to make sure the RV parks or campgrounds you go to have enough space for you to use the slide outs.

When you press the button to slide your RV’s walls out, there really should be no issue. Typically, with an electric version, you will have to make sure the RV has more than enough electricity in its system to power the slide-out motors.

Additionally, you should ensure that all bearings are properly greased. If these two items are checked, you simply just have to turn the motor on and press the buttons on the control panel which move that particular section out.

Generally, electricity-powered slide outs are driven by gears and are found on the lighter, smaller sections. If the slide-out walls aren’t overloaded, then there shouldn’t be an issue.

Slideouts powered by hydraulics are typically found on heavier and larger versions use a pump or motor to move a slide-out into its expanded position. This type is a bit more mechanically complicated compared to the electrical version. The two systems both have their advantages and disadvantages, however, their role is to move the wall out.

The first step would be to try to find out the root of the problem. With this as your goal, there are a couple of things that have to be done to help determine the cause. this basic checklist should help you not only save money but also time.

Generally, the issue turns out to be something extremely basic which can be sorted out by almost anyone. Nevertheless, if you are unable to fix the problem yourself, you could still run through the checklist as it is a great thing to do.

This is in part because mechanics specialized in fixing RVs do not come cheap and trying to figure out what exactly the problem is will simply burn into the mechanic’s expensive time.

We should first begin by conducting an easy and simple test to discover the causes before attempting to move on to other complicated items. It does not matter if your slide-out mechanism is powered by electricity or hydraulics, the slide-out wall will still need to get power from your RV’s battery.

If you press the switch and no movement or sound happens, the first place to begin testing would be the electrical system.

Camping with your RV can cause your batteries to drain easily, forcing the batteries to eventually get old and have to be changed. As stated earlier, the first steps on this troubleshooting checklists will be simple to undertake.

Having a battery that is defective or not performing as it should due to age, could cause your slide-out wall to retract. There is a sure-fire way to find out if it is the battery. You simply need to try to turn the RV on. If the RV comes in then the battery is fine. This means the battery is not the source of the issue.

If the battery does not start, you should inspect the battery’s terminals for corrosion caused by an accumulation of leaked electrolytes. A great way to know if this corrosion is what you see is by the color of gunk. It should be blue and white.

It might not seem like much but this gunk can be more than enough to sever the RV’s connection to the battery. Thankfully this gunk can be cleaned using baking soda which neutralizes the acid mixed with water to act as a solvent as well as a brush to scrub.

When it comes to the electrical fastenings in an RV, the fuse box is the first port of call. Typically, your RV’s fuse box should have a  manual with a diagram that would let you seamlessly pick out the right fuse that control’s the wall slides.

If you happen to find that the fuse is burnt, you still have to simply replace it. You should know that a fuse is typically designed to stop the connected appliance from getting damaged, in this situation, the slide outs by breaking.

Do not make the mistake of replacing it with a fuse that is rated for a much higher voltage. Should the changed fuse break, then it is important that you seek the help of a specialized RV mechanic as something else might be wrong.

This issue is not a complex one. Nevertheless, it can be quite a bit of work to have the connectors go back together simply because of how hard it is to access them.

You should run tests to find out if the control switch is bad by swapping the suspected bad switch with one of the good ones. If this sorts out your stuck slide out then you know it’s just the switch and all you need to do is replace it.

It is important that the wiring is checked. First indirect the endpoints given that the majority of issues tend to gain there. However, the whole line should not be neglected. Rodents, on occasion, tend to use the tubes and wires to sharpen their tooth by chasing them, making every section of the wire liable to damage.

This is a safety feature that has been designed into the RV. Once the motor powering the slide-out wall meets with too much resistance, it will stop.

That being said, larger items can also cause an issue, however, you are likely to notice those items and remove them before they become an issue that causes you to troubleshoot your slide-out compartments.

When you hear the motor having issues or struggling you should check for objects.

While it is rare that these compartments become misaligned, but it is something that can still happen. Should this be the case, you’ll most likely see that the compartment is not parallel to the RV or there should be telltale signs of physical damage.

In the event that the compartment’s mechanisms are fine but something still seems wrong, then it might be a more serious issue such as the chassis of the RV needing realignment. This is something that will have to be done by an expert RV mechanic.

A great way to know if you have a hydraulic leak is to check the hydraulic fluid reservoir. There are times when these systems develop leaks as a result of high pressure which pushes against the weakest point.

If the reservoir shows that your RV’s hydraulic fluid is low, then you will have to investigate. Search for any puddles in and around your RV.

In the event that you haven’t heard of slide-out locks before, they can be described as extendable bars that brace the top part of the slide-out compartment in place.

Should these locks not be present, the mechanical pads would hold the bottom parts of the slide-out wall, however, the top part would not be as snug as it should be.

It is the job of the locks to correct this and it is typically a great purchase as it helps to improve the wall’s seals. The locks also act as safety mechanisms as they prevent the compartment from sliding out while you are in the toad.

It can be so easy to not consider that these locks could be the culprit since they’re never actively used by an RV owner.

Look for the owner’s manual and follow the steps to trigger the manual override. The manual will usually tell you the tools you need and the location of said components.

It can be quite frustrating, however as an RV owner, you should understand that repairs and issues as such are a normal part of the RVing lifestyle. Take a breather and then try to fix the problem of your slide-out malfunctioning by using the tips listed above.