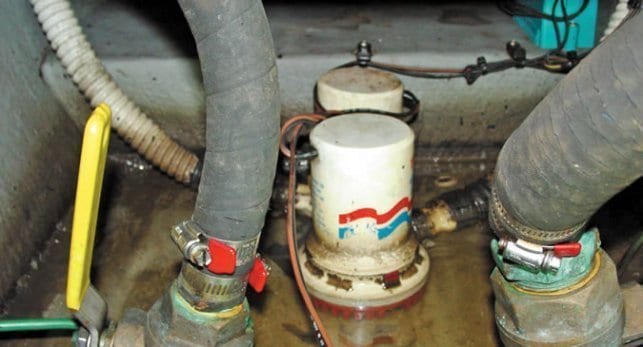 What is Bilge? Bilge is a small shallow area at the bottom of the boat where water collects when a boat is traveling.

But if the water stays for too long, and keeps on accumulating, then the boat might become unstable and could in a worst-case scenario sink.

How do we get the water out? To solve this, Bilge pump where introduced.

A bilge pump helps to remove the water, dirt, and fuel that are present in the water. They tend either be centrifugal or diaphragm electrical pumps.

It so important and the most necessary installation in a boat.

There are many kinds of bilge pumps. Let’s look at them and consider the most effective one that can be used.

Electric bilge pumps are further broken down into two types:

What Do Bilge Pumps Do?

Bilge pump gets the water out of the boat. By doing this, it prevents your boat from sinking. Yes, you heard it right. It is definitely a life savior. It not only removes the water but also some of the dirt particles, thereby, making it clean. It works mechanically and is eco-friendly.

What is the concept of Archimedes screw?

Archimedes Screw is used to bring the low-lying water entity to a higher level. It was used mainly for irrigation purposes. Almost all the pumps we use today are based on this principle. The bore-well also works based on this. When we pump the valve, due to the pressure, the water rises up and we get water. However, it may not work like a screw in a twisting motion.

The reason Archimedes made it twisted is that the ups and downs in a valve may require lots of pressure and may require the use of a motor. In the case of circular motions, you need not to use a motor. If you want to draw the excess amount of water at a time, you can use a turbine in it instead.

A turbine is used to draw the water using a rotating fan and takes the water in and then out through the other end. Bilge pumps also make use of this technology which makes it the most necessary component in the marines.

According to the type of boat or the ship we use, Bilge Pump has different sizes. For a boat with more than one compartment, multiple pumps for each compartment are required. For every Bilge Pump of full coverage, required is a manual pump or an automated motor with a strainer in order to remove the blockage in the pumps. A pump that is capable of pumping 4 kilometers per hour is required for a boat with 7 meters depth or above. If there are under floored compartments, then electric pumps are recommended.

Components for installing a Bilge Pump

So far we have seen what bilge pumps are; its types and components. A basic question arises as to how a leak in a boat can be detected so that we can activate the bilge pump and remove excess water. To detect this, we introduce a small device called “Bilge Counter”.

It is a device that is used to search for any leaks in the boat and alert us about it. It is also called a bilge pump alarm. In a boat, there can be various ways for water to enter. But when we are on the boat, it is quite difficult to identify a leak at an earlier stage. That is why bilge counters were introduced.

But, say the bilge counter encounters a leak and alerts the boat about the leak, but you are off the boat. Then there’s no use of having a bilge counter that cannot automatically fix, but requires a manual trigger for the pump to fix after the leak is found. That is why automated pumps are advised. This is done by using an inline fuse that holds up to the pump even when you are off the boat or if the battery is off, the pump is ready to take action when a leak is encountered.

To install this, you require a 12 volt counter (basic purpose) and some wires. It is recommended to wire the counter directly to the battery using an inline fuse. It should be connected in such a way that the power is provided to both -counter as well as the pump so that it can work together simultaneously.

Note that a counter is only used to alert us about a leak. It is important to have a bilge alarm to activate and alert the pump.

According to our observations, we can see how important it is to have a bilge pump, an alarm, a counter, and its necessary components. Imagine all the bilge pumps that are manufactured are big in size and can be afforded only by large ships. The small boats cannot install bilge pumps and cannot be used. To make it possible for us to install the pumps on small boats, they introduced bilge pumps that are portable and pocket-friendly. This gave rise to the concept “smallest bilge pump”. This also has two basic types.

Also, the main advantages of using small bilge pump are that it has a lower line of action, i.e. as all pumps start pumping only after the water reaches a certain level, the small pump’s pumping level of action is relatively low and it estimates the water level rise at an earlier stage.

Out of the two types that we have observed, the one that submerges itself completely into the water may overcome airlock. The concept of airlock can be explained as follows.

Airlock- Consider a pump is submerged in water and it consists of W-Shaped valves (many ups and downs). When the pump starts pumping all the water and the water is getting out and suddenly there’s some malfunction and suddenly it stops. The water that was previously received, resides in the middle of the valve because there’s no force that can put that water out of the valve. This is called the airlock. If you later try to switch the pump on, due to the airlock, it will not be able to pump and send the water out. To rectify this, instead of using one entire valve as 1 unit, divide the valve into two units so that, you can release the airlock easily reducing the fixing time.