You are here: Home / Boating / Guides / Sterndrive vs Inboard Motors : Which One You Should Go For

There is no shortage of motors for boats nowadays. All kinds of jet engines or outboard motor units are available for purchase, each offering a unique set of benefits and uses.

A particularly hot topic is the sterndrive vs inboard debate. Both motor types are very commonly used in boats, but which one is better? Is there even a better option at all? Well, these are the kinds of questions we are going to give an answer to today. 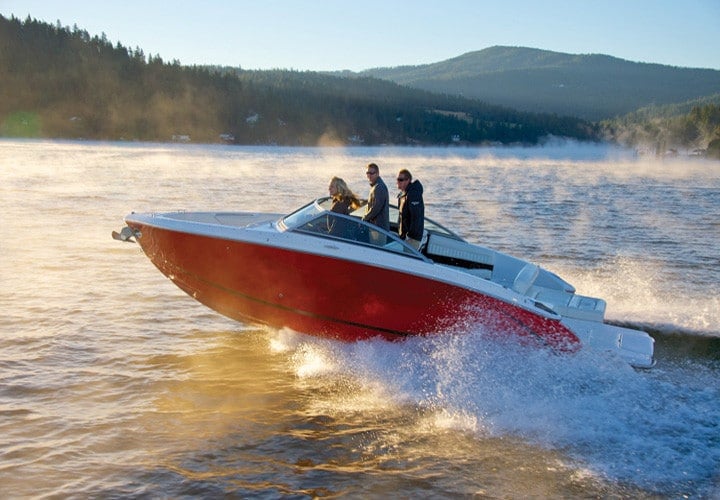 What is an inboard motor?

An inboard motor, as its name suggests, is a motor that is placed inside the hull, usually closer to its middle. The motor is connected to a transmission, which in its turn is connected to a propeller outside the boat.

Boats with inboard motors turn using a rudder which is controlled by a steering wheel. Thus, such boats have distinct mechanisms for propulsion and turning.

In some specialized boats, the inboard motor is placed closer to the stern. Such a design is very commonly seen in boats made for watersports like wakeboard, wakesurf, kneeboard, and many others.

What is a sterndrive motor?

There are many arguments for and against with both inboard and sterndrive motors. And since either type of boat motors has its advantages and disadvantages, we can’t say that one of them is clearly better than the other. Which one is going to be better for you will depend on your needs, as well as the water conditions you will be boating in.

Here are the advantages of inboard motors:

The advantages of sterndrive motors are the following:

Safety is another hot topic in the sterndrive vs inboard debate. It is a common point of view that sterndrive motors are more dangerous than inboards because their propeller isn’t hidden beneath the hull.

While it indeed is true that sterndrive motors’ propellers pose an increased risk of injury, they aren’t as dangerous as some people portray them. When the drive is fully down and submerged into the water, you can’t accidentally injure yourself by, for example, sticking out your arm too far.

So as long as you are careful and follow safety procedures, you should be okay.

On the other hand, you can indeed get injured if you fall out of the boat right into the motor, so there’s a certain degree of carefulness that you need to maintain. This also applies to driving your boat with the drive trimmed up.

Sterndrive motors can pose a danger if you’ve got pets or children with you. In a boat with a sterndrive motor, you would need to keep an eye on your companions all the time. Or if you don’t want to deal with any propellers that are more or less exposed, you need to go for an inboard motor.

Inboard motor units are definitely safer than sterndrive motors. It is very unlikely for you to come in contact with the propeller since it is hidden beneath the boat’s hull. There is a risk, but it is basically non-existent compared to sterndrive motors.

Who should go for an inboard motor unit?

Given the advantages and disadvantages mentioned above, we think that an inboard motor would be more suitable in boats that will be traversing larger water bodies where maneuverability isn’t as big of a concern. In addition, due to their higher stability, inboard motors may be a more plausible choice for boats that will be carrying a lot of cargo.

Inboard motor boats can also be driven in any kind of water without direct exposure to salt and other elements. Their hull and turning components may still require maintenance in saltwater, but the most complex and expensive component – the motor – is going to be safe from its effects.

Aside from that, inboard motors are very frequently used in specialized ski and wake boats, but these aren’t boats that the general consumer should go after since they are specifically designed to perform well in their discipline.

Who should go for a sterndrive motor unit?

We’d say that sterndrive motors are going to be more suitable for boats that are going to traverse small and cramped water bodies. In such areas, the maneuverability and the better reverse are going to really come in handy.

Plus, a sterndrive motor may be a more reasonable choice for a small boat. In a smaller boat, the area occupied by an indoor motor is going to be bigger relative to the area of the boat. So if a free room is important to you, go for a sterndrive motor.

As we’ve mentioned at the beginning, it isn’t possible to say that one kind of a boat motor is clearly better than the other. There are many factors in play which need to be considered by you when trying to pick a motor for your boat.

And hopefully, the pros and cons we’ve overviewed are going to provide you with a good idea of where and in what applications each type of boat motor is going to work well.