You are here: Home / Off Road / Will a Dirt Bike Fit in a Short Bed? 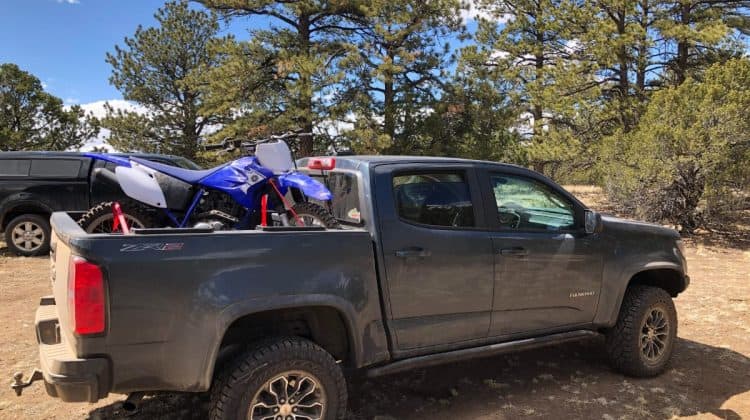 You have bought your first dirt bike. However, you never figured out how to transport it to your home. Your truck bed is not a large one; perhaps you can easily classify it as a short bed. The question pops up. Will a dirt bike fit in a short bed?

Before answering the question, let’s see what the specifications of a typical dirt bike and a truck bed are. What are the methods of loading a dirt bike in a truck bed, and finally, answer the first question?

Specifications of a Typical Dirt Bike

Typically, these four parameters of a dirt bike hold the utmost importance:

These specifications mean that handling a dirt bike can be tiresome. The process of transportation can be rigorous and will need specific vehicles.

However, we need to solve the problem of transporting it in a short bed truck, so let’s see a typical truck bed specifications.

Specifications of a Typical Truck Bed

On the basis of bed size, trucks can be classified as:

A dirt bike can easily fit into a long bed truck However, when it comes to a short bed, you may face some problems, so before addressing the issues, let’s have a look at how to load a dirt bike on a truck.

How to Load a Dirt Bike in a Truck Bed?

Loading a dirt bike in a truck bed may seem easy, but it has its own set of challenges. You cannot lift it up and put it inside the truck bed like any other item. Remember, the typical dirt bike weighs at least 90 kgs? So yeah. There’s some assistance you will need.

What to Do When There’s No Ramp or Stand?

If you don’t have a ramp or a stand, there’s still a solution to the loading problem. Find a steep place to park your truck against it.

When you park your truck on a sloped surface, your tailgate automatically aligns with the ground. You can follow the other steps and load the dirt bike into the truck bed.

However, finding a sloped surface can be challenging, but you need to face the challenge to get your dirt bike home

The loading process can be carried out single-handedly, but having someone’s assistance can be important in case you lose balance.

Another way to do this process is to set up two ramps, one for the dirt bike and the other for you to get up the truck bed. However, the storage of two ramps can become a hassle if you need to load the dirt bike for any later adventure.

There may be times when the process isn’t as smooth as stated. So let’s see what the potential problems with the loading process of a dirt bike are.

There are some potential problems with the process of loading a dirt bike into the truck bed. Some of them are:

There are two ways to fix the problem. The first one is to park the bike diagonally. The second one is to turn the front fork towards the bike’s body.

Now that we have covered all the details of loading a dirt bike on a truck bed let’s answer the initial question. Will a dirt bike fit in a short bed?

The answer is yes.

A standard dirt bike will fit in a short-bed truck if you park it diagonally.

You can even fit two dirt bikes inside a short bed by loading them on the bed, on opposite sides.

Secure them to either side of the truck bed using elastic straps and moving the front forks of each bike towards each other.

If you have solved the problem of loading a bike, you can use the dirt bike’s moving parts to fit it in the short bed.